During my stay at the Max Planck Institute I will be joining senior research scholar Wilko von Hardenberg and Visiting Scholar Sebastián Ureta in organizing a workshop, collection of essays, and book proposal on the theme “Shifting Baselines, Altered Horizons: Politics, Practice, and Knowledge in Environmental Science and Policy.”  This project uses the tools of environmental history and the sociology of science to explore the institutional, cultural, and material contexts in which “natural” baselines emerge as objects of scientific inquiry and public policy.  My project, “Unruly Natures: Pastoralism, Disturbance, and Myths of Wild Africa in the Serengeti Region,” explores the contested role of scientific wildlife conservation in displacing vernacular ways of seeing during the rapid expansion of national parks in Tanganyika around the time of independence.  I argue that the crises of late empire prompted a cohort of colonial officials, international agencies, and conservation NGOs to prize the reports of outside experts from the United States and West Germany over British district colonial officials and Maasai herders.  Focusing especially on the aerial wildlife census data from the former Frankfurt Zoo director Bernhard Grzimek and his son Michael, I show that new instrumentation helped to shift the perception of extinction risk from localized poaching to overgrazing and the desertification of habitat.  Yet aerial surveys of the savannas could not escape the intractable epistemological question, inherited from the colonial era, of which eco-historical baseline—pre-Maasai, pre-colonial, the onset of German colonial rule in 1890, 1919, or 1951, the founding of Serengeti National Park—represented the favored state of the Serengeti and determined the parameters of human settlement within the park.  Instead, new instrumentation and animal tracking assumed a radically new set of baseline conditions shaped by models of carrying capacity, touristic concerns, and racialist anxiety.  Rather than resolving the Serengeti controversies, the Grzimek surveys heightened the uncertainties of park “management” and prompted new land rights conflicts after independence. 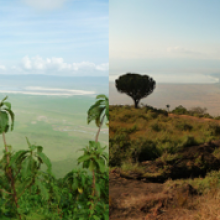