This project revisits construction activities in China by utilizing large datasets of the Chinese local gazette Difangzhi, dating from the tenth to the twentieth century. It examines certain major mineral building materials—typically brick, tile, stone, lime, earth, and cement—which have been used in space-time scales in China as widely as wood but received much less attention than timberwork in the established histories of Chinese architecture. The aim is to reveal an unknown history of mineral material and resource used for Chinese architecture in longue durée, as well as certain hidden historical structure(s) of the material culture.

Difangzhi documentation is a sort of codified knowledge linked to elite officials and local gentry rather than construction practitioners. This project, therefore, considers the data from Difangzhi an autonomous corpus of elite knowledge and differentiates it from the embodied knowledge retrieved from field and laboratory work (observation and experiment), or directly from craftsmen. Also, the research focuses on the spatial distribution of the mineral building materials regarding production and use, and particular geographical and historical environments.

These questions will be discussed: What were the relations between the traditional elite knowledge and the modern knowledge of Chinese architecture built in the twentieth century as a discipline? Secondly, how did the historical structure evolve into the nineteenth and twentieth century when intensive changes happened? Did it represent a decisive factor for the onset of the way the modern forms, ideas, and practice went on? And thirdly, how is the elite knowledge re-conceived and reused today? 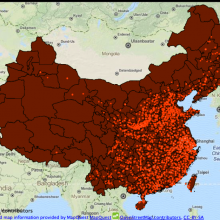