Despite much scholarship on the lives of American crops in Western Europe, their impact on Ottoman science, agriculture, and economy has not been studied in any depth. Exploring the pathways through which such crops and knowledge about them moved, I show this was a multidirectional process in which not only Western European actors but also Ottoman and West African merchants, physicians, laborers, and slaves took part. Moreover, the arrival, acclimatization, and spread of American plants sparked intellectual discourse among Ottomans.

Central to this project is the early history of tobacco in the Ottoman world. Far from passively receiving or being 'infected' with tobacco, the Ottomans were actively produced knowledge about this and other plants from the Americas. For this, my points of departure are two fascinating yet unstudied manuscripts. Dated to the first years of the seventeenth century and written in vernacular Ottoman Turkish, they are treatises on tobacco’s supposed medicinal benefits, revealing the earliest Ottoman attempts to codify knowledge about this crop. These texts show that in addition to acquiring information about tobacco from earlier, sixteenth-century writings from Spain, Ottoman scholars made significant additions that reflected specific agricultural and consumption interests. 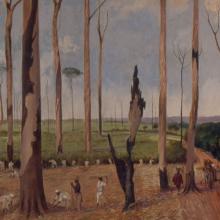