The De li aspecti (Codex Vat. Lat. 4595) is an Italian translation of the De aspectibus, which is a Latin translation of Ibn al-Haytam’s Kitab al-Manazir. The De aspectibus of Alhacen, arrived in Europe in the thirteenth century. Roger Bacon, John Pecham, and Witelo, between 1260 and the 1280, wrote commentaries on “perspective” that made of De aspectibus, the canonical source of the optical theory in the West until Kepler. The De li aspecti is addressed, potentially, to a wide audience that includes artists, artisans, and other professionals. From the point of view of the History of Art, the main reason of interest of the manuscript consists in the fact that it could be one of intermediaries who favored the appropriation of the optical theories by the Tuscan painters and sculptors of the fifteenth century.

The lack of other vernacular manuscripts drawn from the Vatican Library codex could indicate a limited circulation of the code. Nevertheless, Lorenzo Ghiberti transcribed in his Third Commentary large abstracts of a vernacular translation of the De aspectibus. This proves that Florentine artists of mid-fifteenth century were interested in Alhacen’s Theory of Vision. The presence in the manuscript of two drawings of high formal quality by a Tuscan artist of the third quarter of the fifteenth century shows that the Codex Vat. Lat. 4595 circulated in the artistic circles of Florence in the second half of the fifteenth century.

The aims of the project were: 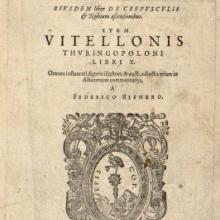