In the past two decades, historical studies of the relations between the experimental and observational sciences and the arts and crafts in the early modern period have placed instruments at the forefront of historical inquiry. Such studies, as well as more general accounts of the reconfiguration of learned knowledge and practice during the early modern period, have demonstrated the extent to which the generation of learned natural knowledge crucially depended on instruments understood as resources constructed out of, and working upon, wider society. This project shifted attention towards new kinds of material objects: natural raw materials and substances processed in the workshop and laboratory. In the early modern period, metals, salts, acids, dyestuffs, gunpowder, alcoholic beverages, ceramics, glass, soap, animal and vegetable remedies, and so on were simultaneously commodities and objects of scientific inquiry. Like clocks, telescopes, and balances, these materials bridged the artisanal and the academic worlds. As they were objects shared by artisans and savants, they had many different significances and uses, according to how they were deployed in different practical or epistemic contexts. Traveling from sites of commercial production and consumption to academic institutions, and vice versa, they spurred the generation of both learned and technical knowledge.

For example, vegetable materials extracted from plants, such as gums, resins, and balsams, were commodities of the apothecary trade, often imported from foreign countries. Seventeenth and eighteenth-century apothecaries sold these materials as raw materia medica or used them as ingredients in older Galenic compounds and newer chemical remedies. As chemical remedies were products of chemical operations, academic chemists also studied these materials. In eighteenth-century chemical teaching and experimenting, these materials were explored on the one hand as remedies, with the aim of enhancing their pharmaceutical virtues, and on the other hand as natural bodies that provided information about the composition and economy of plants. Chemists’ analyses of plant materials thus often pursued the dual goal of contributing to learned and artisanal knowledge.

Focusing on materials, the project further moved from institutions and activities that have been unambiguously viewed as typical of “experimental philosophy,” thus as foundational to modern scientific inquiry, towards sites in which the practice of the arts and crafts intersected with many different types of learned culture. This dual shift broadens our notion of material culture by taking materials seriously as the subject of historical knowledge, but also suggests some revisions to the standard historical picture of the emergence of the natural sciences. A viewpoint still powerful within the field of history of science, which situates experimental philosophy and the history of physics at the center of attention, is here replaced by a decentered approach that takes into account a broader range of forms of making and knowing in the early modern period, including natural history, chemistry, pharmacy, and medicine. All of these latter cultures resist a clear categorization under the rubric of experimental philosophy. By analyzing the making, uses, and meanings of materials between 1600 and 1800, the project examined how different cultures of natural history, experimental history (historia experimentalis), and experimental philosophy intersected both with artisanal labor and craftsmanship and with everyday practices of commerce and consumption. 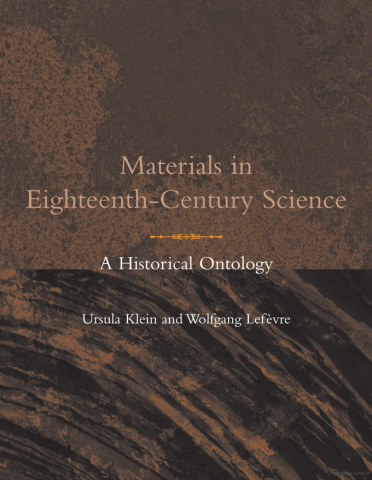