During the course of his investigations towards a unified field theory, Albert Einstein continuously drifted to the sole application of mathematical reasoning to guide his search. In doing this, he in particular left aside traditional methods such as induction from data or deduction from physical principles, which he applied very successfully earlier in his career. Furthermore, Einstein's work consequentially left the terrain of testable theories.

For her research at the Max Planck Institute for the History of Science, Bernadette Lessel seeks to understand the historical process contextualizing Einstein's belief in a unified field theory, which also conditioned his choice of means. Building on this,the project will trace a similar development, regarding the use of mathematics as a tool for reasoning in theory development, in the history of quantum gravity, where it is also being claimed that approaches are mathematically intricate but far away from experiment.

To understand this development, the project will try to outline the historical and cultural processes that led to the final theory program in the first place, putting another emphasis on the specific motivations and self-understandings of the founding fathers of quantum gravity.

Finally, the project will consider how this knowledge, gained with historical methods, can aide in the further development of the final theory program itself. 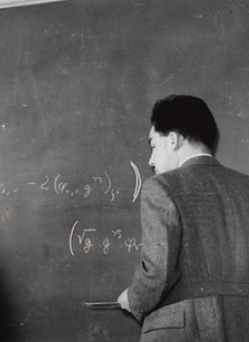 Feature Story
Dreams of Unification: The Role of Mathematics in Final Theory Programs

Historical Epistemology as Means to Understand the Abstractness of Modern Physics