Humanity has precipitated a planetary crisis of resource consumption—a crisis of stuff. So ingrained is our stuff-centric view, we can barely imagine a way out beyond substituting a new portmanteau of material things for the one we have today.

In The Human Scaffold, Josh Berson offers a new theory of adaptation to environmental change. Drawing on niche construction, evolutionary game theory, and the enactive view of cognition, Berson considers cases in the archaeology of adaptation in which technology in the conventional sense was virtually absent. Far from representing anomalies, these cases exemplify an enduring feature of human behavior with implications for our own fate.

The time has come to ask what the environmental crisis demands of us not as consumers but as biological beings. The Human Scaffold offers a starting point.

The Human Scaffold: How Not to Design Your Way Out of a Climate Crisis 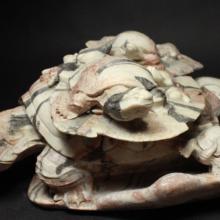 Reclaiming Turtles All the Way Down
more