China’s scientific research related to climate change has a long history, evolving primarily from atmospheric science and meteorological research developed in the early years of the People’s Republic of China to become an important component of global climate research in recent years. In this development, the scientific community has gained advanced competence in key technical areas such as building climate models that reflect the particular nature of the regional environment for China and East Asia, and interacting with international peers to improve global models. Moreover, as the scientific community became more concerned with the causes and effects of the Anthropocene, it increasingly adopted an emerging role in climate service, that is, supplying key scientific advice to policy makers engaged in domestic and international climate change policies.

This project examines this historical process through the concept of the formation and political role of the epistemic community. This involves collecting data on the evolving theoretical perspectives and empirical research focus that China’s climate change epistemic community adopted during recent decades, and characterizing the key advocates and their impact on China’s policies. The research will be conducted in collaboration and dialogue with the members of the working group “Local understandings of a global problem – Scientists, imaginaries and climate change in the PRC.”

The primary output of the project will be an Observations paper, which will be developed into a manuscript to be submitted to a scientific journal. 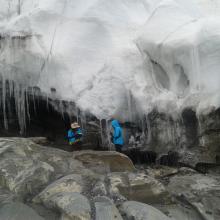