During the thirteenth century, ancient geocentric cosmological knowledge was reshaped in the framework of the process of re-elaboration of both ancient and Arabic scientific knowledge. Thirteenth-century authors engaged in producing new treatises entitled The Sphere, which were characterized by restructuring the content rather than introducing new content. Johannes de Sacrobosco’s treatise inaugurated a new tradition of knowledge that continued for four centuries. When the period that spans the diffusion of printing technology until the end of the seventeenth century is taken into consideration, over 350 editions of Sacrobosco’s The Sphere were printed in Europe. This impressive number testifies to a growing audience in and outside the universities all over the continent, while the treatise, which was originally short, underwent a profound transformation, as it was continuously enlarged and enriched with more and more topics. The treatise entitled The Sphere of Sacrobosco, considering its long-lasting influence, therefore represents the virtual place in which a shared scientific identity was shaped over the European continent.

The analysis of the complete collection of the treatises produces a great amount of data that can be modeled to mirror the transformative process effected upon the treatise throughout its history. First, the distribution of the bibliographic metadata over time and space was explored using visualization tools, and it was determined that the structure assumed by the network of treatises was mostly centralized around four major hubs able to act on the entire continent.

Second, analytical tools, which were developed in the frame of the Physics of the Complex Systems, have been implemented to investigate the multiplex network that is constituted, on the one hand, by the relations between authors, printers, and further economic and educational institutions involved in the creation, production, and diffusion of the treatises, and, on the other hand, by the semantic relations between the treatises. In fact, their content changed over time according to a local-universal mechanism: new subjects were created on a geographic local level and then transformed, for instance through translations into Latin, and distributed by the great hubs all over the network.

Go to Sphaera Site
Go to

Dept. I seeks a Research Fellow for the machine-learning project "The Sphere," deadline Feb. 12, 2021

The Sphaera CorpusTracer database has been launched! 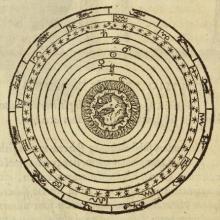