Beijing-born Vivian Xu is a media artist and researcher currently based in Shanghai. In 2013, she received her MFA in Design and Technology from Parsons the New School for Design. She is an independent artist. Her work explores the boundaries between bio and electronic media in creating new forms of machine logic, life and sensory systems, and often take the form of object, installation and/or wearable. She has shown, lectured, and performed at various institutions in China, the US, Germany, and Australia, including the National Art Museum of China (Beijing), the Central Academy of Fine Art (Beijing), the China Academy of Art (Hangzhou), the Chronus Art Center (Shanghai), the Rockbund Museum (Shanghai), the Shanghai Symphony Orchestra (Shanghai), the New York Science Museum (New York), Gallery Ho (New York), the Art Laboratory Berlin (Berlin), and SymbioticA at the University of Western Australia (Perth). Vivian co-founded Dogma Lab, a trans-disciplinary design lab in Shanghai that is dedicated to creating experimental research at the intersection of design, technology, art and science. From 2013–2015, she was a research fellow at the New York University Shanghai Campus. Since then, she has lectured at various universities and programs, among them Shanghai Tech University, Chinese University of Hong Kong Shenzhen Campus, and the Roy Ascott Technoetic Arts program. Her work has been featured in media and press, including a documentary series by VICE China, Elle US, and the China Global TV English Channel. Her project at the MPIWG is an artist book of her bio machine art series The Silkworm Project. She will work closely with MPIWG researcher Lisa Onaga and the Art Laboratory, Berlin on this project. The piece will be shown in an exhibition alongside The Silkworm Project series at Art Laboratory Berlin. 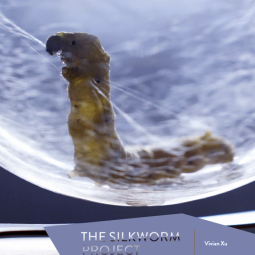