Esoteric Knowledge remains a central problem of ancient science, since much of the scholarly heritage of ancient schooling was only meant for a small circle of adherents, rather than for the general public. For this reason, knowledge was restricted within schools or within professions, only accessible to those with a personal connection to experts and savants.
The expression ‘esoteric’ is used today rather indiscriminately. Within the category of ‘esoteric knowledge’ one understands a variety of related expressions, such as ‘mystical’ or ‘occult’, as well as the more concrete ‘absolute’ or ‘elevated’ knowledge, which can also be considered as ‘hidden’, ‘secret’, or ‘inaccessible’, and even ‘fanciful’ or carried away. The confused pattern of these definitions is the reason why a closer look at the historical development of this concept is so important.
This Preprint provides case studies of esoteric knowledge, within the realms of philosophy (e.g. esoteric vs. exoteric knowledge), religious knowledge (early Christian thought, Gnosticism, cultic practices), geography, divination, alchemy, dream interpretation, and iconography. Examples of esoteric knowledge presented here extend from Mesopotamia and Egypt into Graeco-Roman and early medieval models, in Akkadian, Egyptian, Syriac, Greek and Latin sources, indicating the durability and continuity of this concept.

This paper presents six cases in ancient Greek cultures of knowledge, which make it possible to posit a connection between certain modes of presentation and institutional context. Among the texts looked at are the Hippocratic Epidemics, Aristotelian discourse, Hellenistic mechanics, and theoretical mathematics. While historical reconstruction of the institutional contexts involved is impossible, each of the cases leaves room for observations concerning an interdependence of knowledge-presentation and ‘setting’, understood as standard social context of reception. The paper describes resulting modes (collective, epideictic, school mode, how-to mode, analytical, and esoteric modes) as responding to and possibly emerging from certain contexts, but also as registers that later became per se possible choices for science writers, each catering to specific functions within the transmission and presentation of knowledge. With respect to Greek science, it remains an open question, whether and how one can separate a style of reasoning from a mode of presentation, that is, separate epistemic from rhetorical structures.

Galileo and the Others 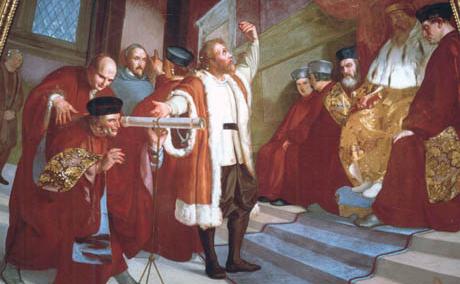 No 10 To mark the anniversary of Galileo’s discovery of Jupiter’s moons, the magazine Sterne und Weltraum will publish a special issue with contributions from researchers of the MPIWG.
More