Born in 1978, Rohini Devasher lives and works in New Delhi. She received her MA in Printmaking from Winchester School of Art in the UK and her BFA from the College of Art in New Delhi. Her work has been exhibited widely in India and abroad. Devasher’s artistic practice explores the interface between the underlying laws and processes which govern growth and form in biological and physical systems and their mirroring in the digital domain. Standing at the threshold of art, science and fiction, her forms pulsate with primordial life, while simultaneously being precursors to a futuristic space. Her work involves research and fieldwork in astronomy, a significant part of which was developed at the Max Planck Institute for the History of Science in Berlin in 2012.

She has exhibited her works in group shows at the Kiran Nadar Museum, in Noida, the Institut d’art contemporain, Villeurbanne/Rhône-Alpes, the Zacheta National Gallery of Art, in Warsaw, the Apeejay Media Gallery and Vadehra Art Gallery in Delhi, The Courtauld Institute of Art, the Frieze Art Fair 2011, Green Cardamom and the British Library in London, Bose Pacia in Kolkata, and the Royal Scottish Academy in Edinburgh. Her first solo show “Breed” was held at Project 88 in Mumbai in 2009 followed by her second solo “Permutation” with Nature Morte, New Delhi. Forthcoming projects include the Kochi Muziris Biennale 2012, Kochi India. 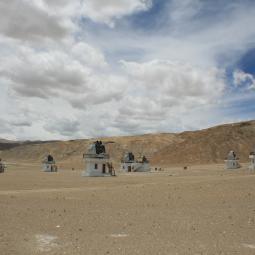 The Light of Things Hoped For…
Mehr